ABorn in Budapest in 1906, Eva Stricker entered the Royal Academy of Fine Arts at age 17, intending to become a painter, but her mother prevailed upon her to learn some trade whereby she could earn a living, the world of fine art being chancy. So Eva apprenticed herself to a traditional potter and began learning her trade and graduated to journeyman status. She moved to Schramberg, Germany, where she acquired skills in all phases of industrial production and became one of the first (and certainly the first woman) to move the ceramic arts into contemporary mass production. 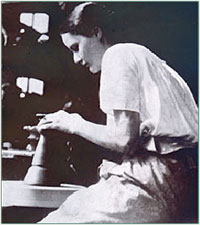 In 1932 she went to Russia to experience the new artistic and social movements there, as did many other idealistic young artists and intellectuals. As an experienced industrial designer she was soon offered a position assisting in the modernization of the ceramic industry, where her creativity and dynamism stood her well. She traveled to many parts of Russia in order to understand and coordinate efforts to create a central manufactory that would make products for the homes of the everyday citizenry. Her efforts were recognized, and she was soon transferred to the Lomonosov factory in Leningrad (the former Imperial Porcelain Factory). This in turn led to her appointment as Artistic Director for the Porcelain and Glass Industries for the entire country.

In 1936, however, she was caught up in one of the Stalinist purges, accused of plotting against the life of Stalin. She was imprisoned in the NKVD prison for 16 months, most of the time in solitary confinement. She was subjected to early forms of brainwashing, torture, and the constant possibility that each day would be her last.

Then one day she was unexpectedly led out of her cell to what she feared was to be her execution but was instead put on a train to Austria in the clothes she was standing in. Once in Austria, she left on the last train out at the time and went to England, and later married Hans Zeisel.

Moving to the United States

In 1939, they moved to New York. Eva obtained a position to create the department of ceramic arts industrial design at Pratt Institute in Brooklyn, where she taught until 1952. In the late 1940s and early 1950s Eva was commissioned by Hall China Company to create more a modernized dinnerware line and other ceramic pieces. Items Eva designed for Hall China included the "Tomorrow's Classic" and "Century" dinnerware lines, the Norris Water Jug, Morning Breakfast Set, and the Zeisel Cookie Jar.

Eva Zeisel has received many honors for her outstanding achievements. Her works are in the permanent collections of: Brohan Museum, Germany; the British Museum; The Victoria and Albert Museum, London; the Musée des Arts Décoratifs de Montréal; The Museum of Modern Art, New York, and the Brooklyn, Metropolitan, Dallas, Knoxville, Milwaukee, Hillwood (Washington, D.C.); the Erie (NY) and Mingei International (San Diego) museums in the United States, among others. She has had retrospective exhibitions in dozens of museums in the United States and abroad and has lectured widely.