In July 1903, the former partners in the inoperative East Liverpool Potteries Company met in the home of Robert Hall to settle the affairs and distribute the physical assets of the company. Mr. Hall accepted, as his share, ownership of the plant located on the southeast corner of East Fourth and Walnut Streets, which had previously been known as the West, Hardwick and George Pottery.

Mr. Robert Hall died in 1904. On Mr. Hall’s death, his son, Robert Taggart Hall, became the manager. From 1903 to 1911, Mr. Hall experimented to develop a glaze that would stand the high heat (2400 degrees Fahrenheit) required for bisque firing, thus making possible single-fire ware that would be non-porous and craze-proof. This single-fire process had been used in China during the Ming Dynasty (A.D. 1368–1644).

The fact that the Hall kilns kept burning during the initial years was due largely to the efforts of Francis I. Simmers, who became associated with Robert Taggart Hall soon after the death of the founder. During those lean days, Mr. Simmers, a.k.a. "King of Sales", kept the orders coming in for white ware - combinets, bedpans, mugs and jugs to keep the company in operation. Mr. Simmers also laid the groundwork for later developments. Dinnerware, added to the line in 1908, was made in small quantities.

In 1911, Robert Taggert Hall was successful in developing the first leadless glaze. The resulting products that came out of the kiln were strong, non-porous and craze-proof. This new process fused together the white clay body, color and glaze when it was fired at a temperature of 2400 degrees Fahrenheit. This resulting product was very dense, did not absorb moisture, and held heat well.

World War I gave Hall China Company an opportunity to furnish chinaware to the institutional trade and they were able to maintain that trade after the war was over. All available production facilities at Hall were devoted to the manufacture of casseroles, teapots, coffeepots, coffee urn liners, and other vessels used in the preparation and serving of food. This gave impetus to the trend toward Hall China cooking ware that had started with the introduction of the single-fire product.

In 1919, Hall’s production facilities were increased through the purchase of Goodwin Pottery Company at East Sixth and Broadway, and an entirely new line was introduced – gold decorated teapots for the retail trade.

Many teapots that were made in the 1920's had normal body decoration and the spout, handle and lid knob were covered with gold. These teapots have a normal inventory number for the shape and color, followed by the letter "S".

The Gold Label line grew in the 1950's with the addition of bowls, casseroles, cookie jars and twelve teapots. All had fancy gold body decorations, and the spout, handle and lid finial, or knob, were covered in gold. These products have an inventory number for shape and color followed by 'GL'.

Production of the Gold Label line lasted for approximately 10 years and then discontinued in the late 1960's.

Continued success and obsolete equipment prompted management to build a new factory in the east-end of East Liverpool, Ohio. The place was completed in 1930, and later underwent numerous expansions during the thirties and early forties. As production continued to boom the company focused on decal dinnerware and kitchenware patterns.

Hall China Company became the world’s largest manufacturer of decorated teapots and launched a campaign to educate the American housewife as to the proper methods of brewing tea, and, of course, the proper pot was a Hall.

In 1933, Hall China Company made its first autumnal decorated bowl for the Jewel Tea Company to be used as a premium. During the early 1930s, Hall was turning out teapots, coffee pots, custards, ramekins, casseroles, shirred egg dishes, coffee urn linings, pot pie dishes, steam table pots, and bain marie jars, among other items. Management had such high confidence in the ware that a two-year guarantee was offered with every piece.

The Hall/Jewel Breakfast set was produced in 1936. This was the first dinnerware made by the Hall China Company since its brief encounter in the years 1908–1914. 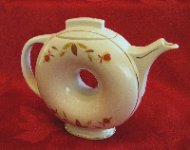 In 1938, Hall China produced six new teapot designs. They were all fanciful shapes and they become known as the Novelty Teapots. Novelty teapots were patterned after an object - such as an automobile, donut, football, or birdcage.

During this same period of time, Hall made other dinnerware lines for other Tea companies and Sears, Roebuck and Company. They made a line of refrigerator pieces exclusively for Westinghouse. Hall China also made another exclusive pattern for the Jewel Tea Company called Cameo Rose, but it did not prove to be successful and was soon dropped.

World War II brought new problems to the Hall China Company, as it had for all other American manufacturers. The pottery industry in East Liverpool expanded as the United States government signed wartime defense contracts for sufficient dinnerware and food service ceramics. Hall had to put aside its design and decorative initiatives due to the war efforts.

By the late 1940s and early 1950s, Hall began to refocus on dinnerware design and commissioned Hungarian industrial designer Eva Zeisel for that task. Eva's disciplined mind and freewheeling design sense was already associated with modern design in furniture, ceramics, toys and many everyday items. The results were the 'Tomorrow's Classic' dinnerware line. Rave reviews streamed in and the design was an unqualified success with wide appeal.

In the late 1950s, Eva designed the 'Century' dinnerware line. The two dinnerware lines were produced under the signature label, Eva Zeisel Hallcraft. Other designs by Eva included the Norris Water Jug, Morning Breakfast Set, and the Zeisel Cookie Jar.

In 1985, Hall re-introduced some of its old kitchenware and teapot shapes for the retail trade.

Today, the Autumn Leaf pattern is no longer available through the Hall China Company, except for commissioned pieces for the National Autumn Leaf Collectors Club©.